There are so many childhood diseases, infectious and noninfectious, that it would be impossible to list them all here. However, we will introduce some of the most common ones, including viral and bacterial infections as well as allergic and immunologic illnesses.

A number of different viruses cause bronchiolitis (inflammation of the small airways), which affects children less than 1 year of age. Most commonly, it is caused by RSV (respiratory syncytial virus), but it can also be caused by influenza and other common viruses associated with upper respiratory symptoms such as fever, runny nose, and cough. A common symptom of bronchiolitis includes all of the above and wheezing (the same symptom observed in children with asthma). It is common in the winter months, and some infants will require admission to a hospital when the respiratory symptoms are very severe. The treatment of bronchiolitis is different from asthma; however, some of the same medications might be used. For a small percentage of infants, this first wheezing episode may be a harbinger of a future diagnosis of asthma, but for most, it is a one-time event.

Ear infections are very common in children and are caused by a dysfunction of the Eustachian tubes, the tubes that connect the inner ears to the throat and serve as a drain for any fluid that may collect there. When fluid collects, it attracts bacteria and other germs, which may multiply and cause a symptomatic infection. Symptoms include fever, ear pain, tugging on the ear, or even drainage from the ear canal. Treatment of ear infections may involve observation or antibiotics. Occasionally, the fluid inside the middle ear may need to be drained.

Croup is common in young children. A number of different viruses cause croup, and inflammation of the upper airways, including the larynx (voice box) and trachea (windpipe), cause symptoms. These symptoms include a barking cough and stridor, and a wheeze on inspiration. Most children with croup can be treated at home, but occasionally, when severe enough, hospitalization may be required. Treatment may include steroids and inhaled medications for the more severe cases. Always check with your doctor if you are concerned or if your child appears ill. 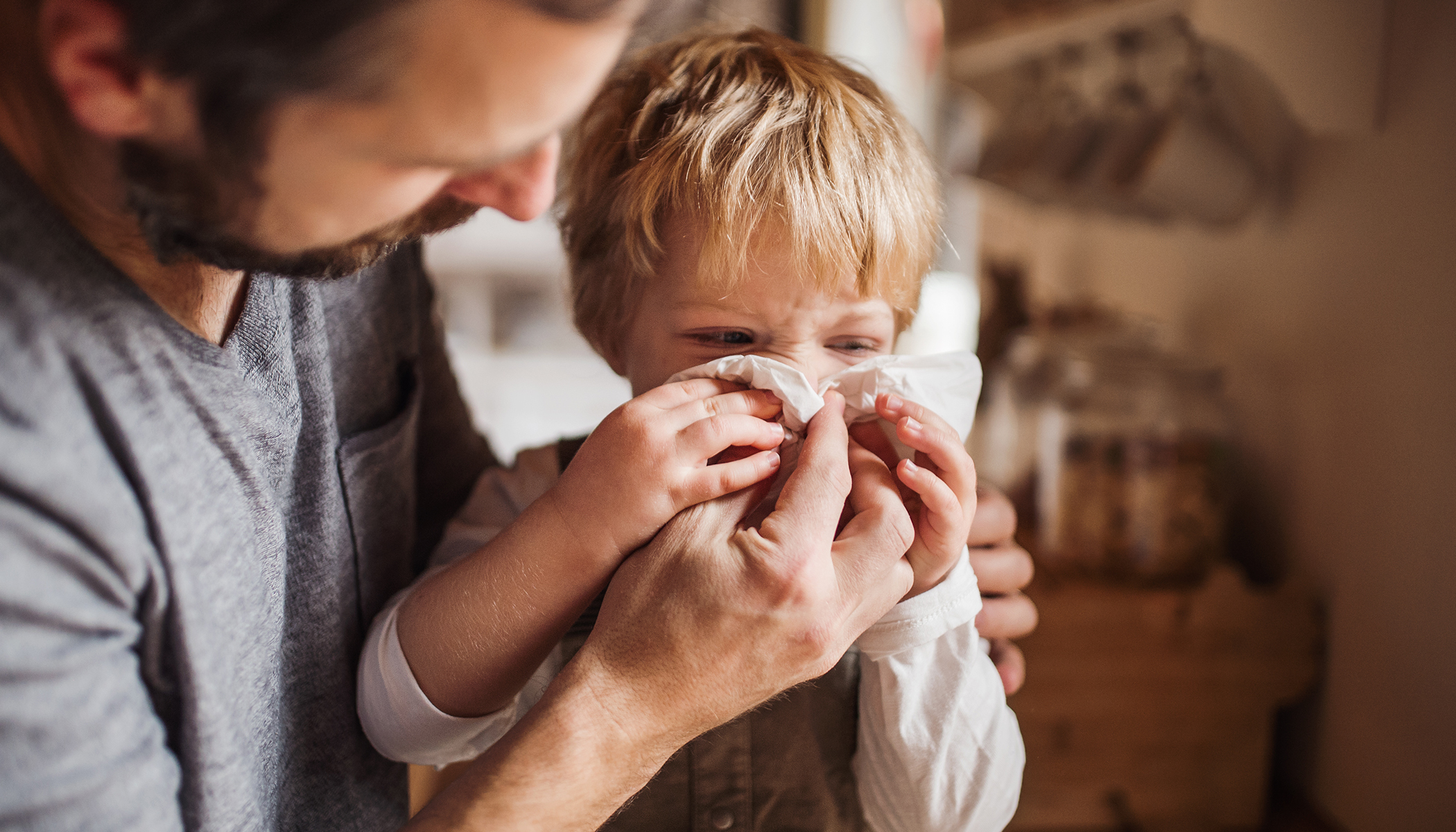 Pinkeye is also called conjunctivitis. A virus is the most common cause of pinkeye, but a bacterial infection can cause it on occasion. Pinkeye is very contagious and can spread through schools and daycares quickly. Always talk with a healthcare professional to determine whether additional therapy is needed, but most cases resolve within five days.

The varicella virus causes chickenpox. Vaccination is routine now, and it is rare to see a regular case now. Before the vaccine, it was a very common cause of hospital admission. Though chickenpox infection is usually a benign (but uncomfortable) event in a child’s life, there is a significant risk of severe complications, including bacterial skin infections, pneumonia, and others. That is the reason that vaccination is recommended and routine. It can go dormant and result in shingles in some people as they age (usually over 60 years of age).

The rubeola virus causes measles, and it used to be an extremely common childhood infection prior to routine vaccination. Unfortunately, due to an increased rate of vaccination refusals by parents, we are starting to see sporadic outbreaks amongst those groups. Measles is an acute viral illness that can lead to serious complications, even death, and generally begins with nonspecific symptoms such as high fever, runny nose, and cough. Following these symptoms, patients develop a rash that spreads from the face to the feet. Symptoms generally start one to two weeks after exposure, and the symptoms last for less than a week.

Mumps is a viral illness that typically starts with flu-like symptoms and then results in acute painful swelling of the salivary glands (parotitis). Prior to routine vaccination, this was a very common illness. Symptoms generally appear more than two weeks after exposure, and the illness lasts seven to 10 days. As with many childhood viral illnesses, though most infections are mild, there is a real risk for complications, including meningitis and death.

Meningitis is an inflammation of the tissue surrounding the brain and spinal cord (meninges). Viruses or bacteria may cause meningitis. Symptoms include headache, stiff neck, fever, and malaise. Routine vaccination has decreased the incidence of many bacterial causes; however, viral causes are still common. Bacterial meningitis can result in severe outcomes, including permanent hearing loss, brain damage, and even death. 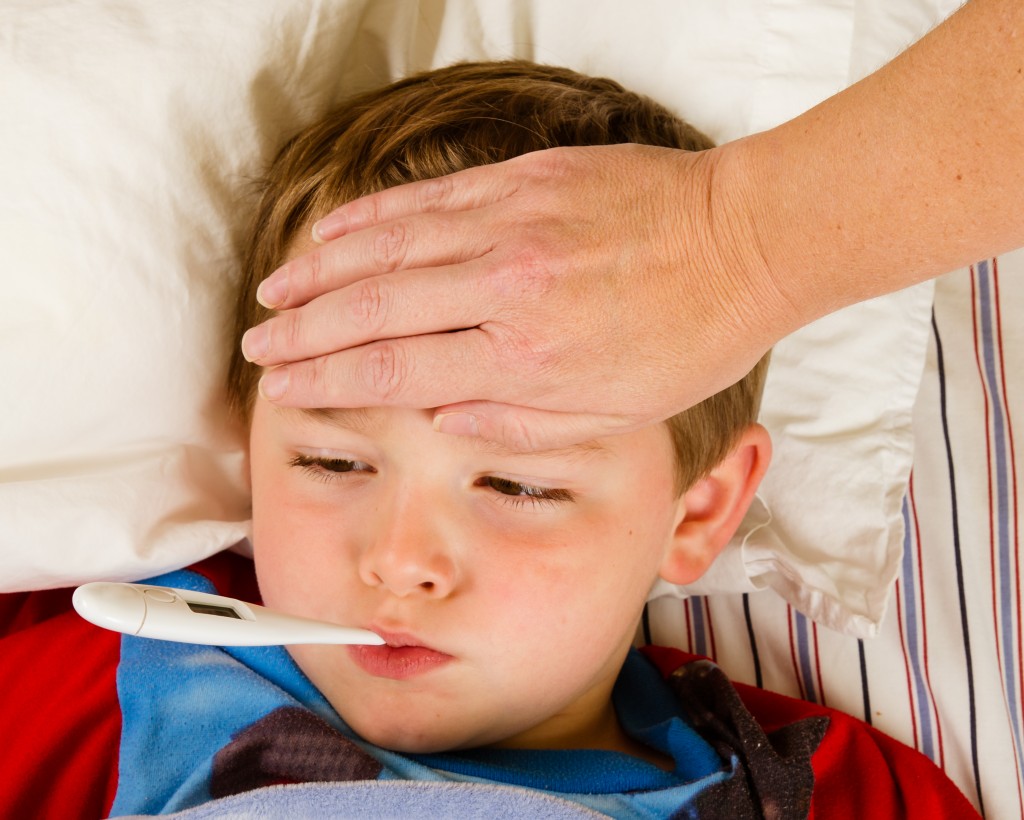 A strain of Streptococcus (strep), a common skin bacterium, causes strep throat. Symptoms include a sore throat and fever that lasts more than a few days. Often there may be a white-coloured discharge (pus) in the back of the throat and enlarged lymph nodes on the neck. Strep throat will resolve on its own, however, antibiotics are recommended due to the risk of developing rheumatic heart disease, a serious but preventable consequence of strep infections.

A common fungus causes ringworm. This is not a “helminthic” disease (no worms involved). The name was developed due to the “worm-like” ring that is seen during these infections. Antifungal medications treat ringworm. It can spread from child to child, so care needs to be taken.

The flu typically is seen during the winter months and causes high fever, chills, body aches, and other symptoms. It usually resolves on its own, but in some, it can result in serious complications including pneumonia. Currently, annual vaccination is recommended universally for all people aged 6 months and older.

Seasonal allergies are the bane of many children and adults. Runny noses, sneezing, and puffy eyes are all common symptoms. Unfortunately, there is no cure for these; however, there are medications that can be taken to lessen the symptoms. Antihistamines are available as both prescription and non-prescription formulations and can be taken orally, used as nasal sprays, and even as eye drops. The goal is to decrease the severity of the symptoms.

If you have any questions or concerns about appropriate care for your child, please discuss them with your pediatrician. While it may be tempting to go to a nearby after-hours clinic if your child is ill, your pediatrician knows your child best, has your child’s medical records and is the best place to start for advice.