The Difference Between Viral and Bacterial Infections

Bacterial and viral infections have many things in common. Both types of infections are caused by microbes – bacteria and viruses, respectively – and spread by things like:

Throughout history, millions of people have died of diseases such as bubonic plague or the Black Death, which is caused by Yersinia pestis bacteria, and smallpox, which is caused by the variola virus. In recent times, viral infections have been responsible for two major pandemics: the 1918-1919 “Spanish flu” epidemic that killed 20-40 million people and the ongoing HIV/AIDS epidemic that, although on the decline, has still been responsible for 690 000 deaths in 2019.

Bacterial and viral infections can cause similar symptoms such as coughing and sneezing, fever, inflammation, vomiting, diarrhoea, fatigue and cramping – all of which are ways the immune system tries to rid the body of infectious organisms. But bacterial and viral infections are dissimilar in many other important respects, most of them due to the organisms’ structural differences and the way they respond to medications.

The Differences Between Bacteria and Viruses

Although bacteria and viruses are both too small to be seen without a microscope, they’re as similar as chalk and cheese.

Bacteria are relatively complex, single-celled creatures, many with a rigid wall and a thin, rubbery membrane surrounding the fluid inside the cell. They can reproduce on their own. Fossilized records show that bacteria have existed for about 3.5 billion years, and bacteria can survive in different environments, including extreme heat and cold, radioactive waste, and the human body.

Most bacteria are harmless, and some actually help by digesting food, destroying disease-causing microbes, fighting cancer cells, and providing essential nutrients. Fewer than 1% of bacteria cause diseases in people.

Viruses are tinier: the largest of them are smaller than the smallest bacteria. All they have is a protein coat and a core of genetic material, either RNA or DNA. Unlike bacteria, viruses can’t survive without a host. They can only reproduce by attaching themselves to cells. In most cases, they reprogram the cells to make new viruses until the cells burst and die. In other cases, they turn normal cells into malignant or cancerous cells.

Also unlike bacteria, most viruses do cause disease, and they’re quite specific about the cells they attack. For example, certain viruses attack cells in the liver, respiratory system, or blood. In some cases, viruses target bacteria. 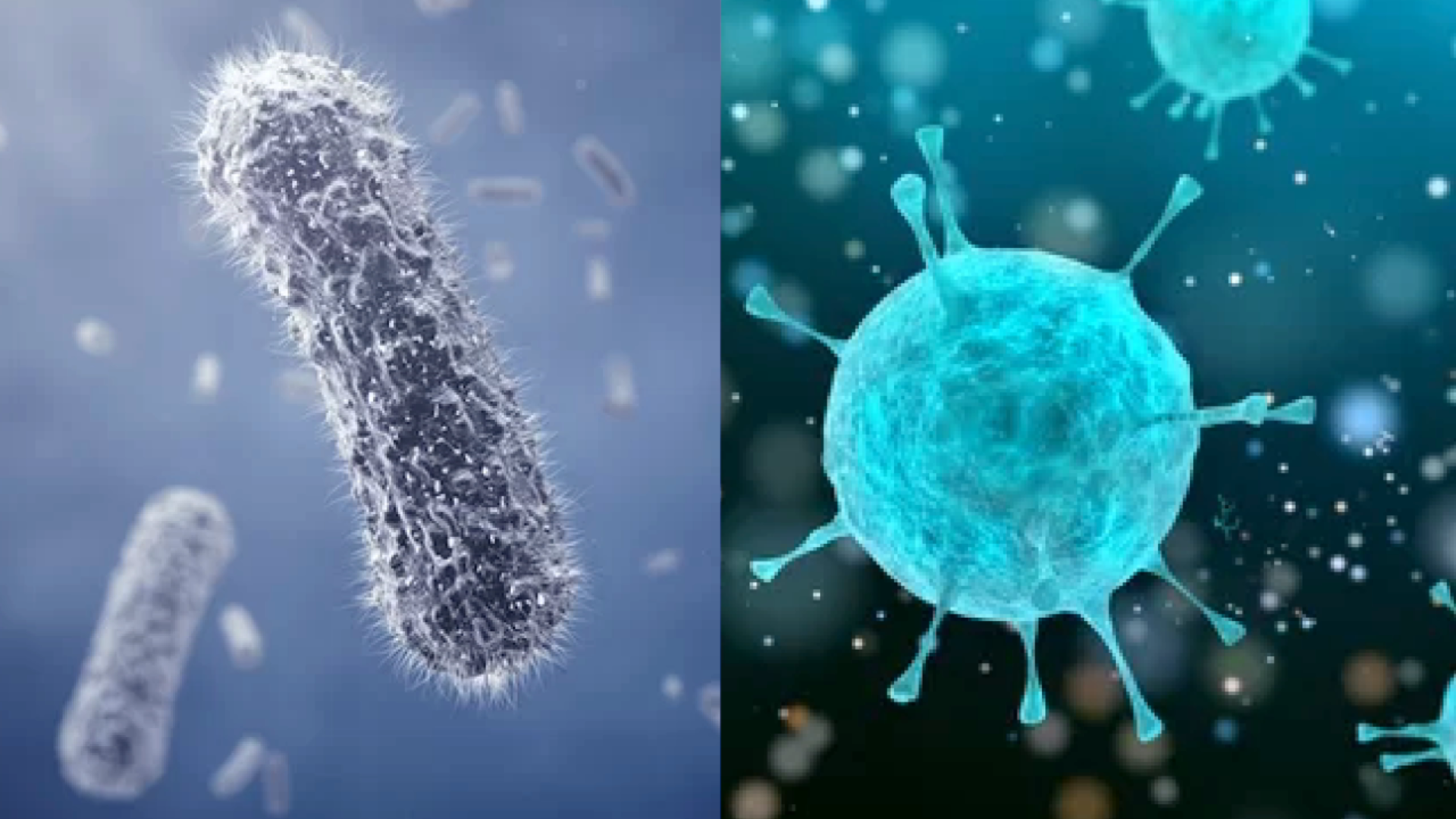 Diagnosis of Bacterial and Viral Infections

You should consult your doctor if you think you have a bacterial or viral infection. Exceptions include the common cold, which is usually not life-threatening. In some cases, it’s difficult to determine whether an illness is viral or bacterial because many ailments – including pneumonia, meningitis, and diarrhoea – can be caused by either. But your doctor may be able to determine the cause by listening to your medical history and doing a physical exam.

If necessary, they also can order a blood or urine test to help confirm a diagnosis, or a “culture test” of tissue to identify bacteria or viruses. Occasionally, a biopsy of affected tissue may be required.

Treatment of Bacterial and Viral Infections

The discovery of antibiotics for bacterial infections is considered one of the most important breakthroughs in medical history. Unfortunately, bacteria are very adaptable, and the overuse of antibiotics has made many of them resistant to antibiotics. This has created serious problems, especially in hospital settings.

Antibiotics are not effective against viruses, and many leading organizations now recommend against using antibiotics unless there is clear evidence of a bacterial infection.

Since the beginning of the 20th century, vaccines have been developed. Vaccines have drastically reduced the number of new cases of viral diseases such as polio, measles, and chickenpox. In addition, vaccines can prevent such infections such as the flu, hepatitis A, hepatitis B, human papillomavirus (HPV), and others.

But the treatment of viral infections has proved more challenging, primarily because viruses are relatively tiny and reproduce inside cells. For some viral diseases, such as herpes simplex virus infections, HIV/AIDS, and influenza, antiviral medications have become available. But the use of antiviral medications has been associated with the development of drug-resistant microbes.

We hope the information in this article has given you some insight into the difference between the two major disease causing pathogens. Do you have any other facts you want to share? Leave them in the comments below.