– Other virtues of ginger

– Ginger: What are the risks?

Ginger is one of the main medicinal plants used in Indian medicine called “Ayurvedic,” one of the oldest medicines in the world. The United States imports most of the world’s ginger with approximately 89% of all US ginger imports. Texts dating back more than 3,000 years already recommended ginger for various ailments, such as nausea, migraines, and intestinal problems.

Here is an update on the different virtues of this plant, but also its undesirable effects.

– It relieves disgust and vomiting related to pregnancy or motion sickness.

– It reduces nausea caused by chemotherapy or appearing after an operation.

– It helps to evacuate intestinal gases.

– It fights biliary and pancreatic insufficiency.

– It protects the mucous membrane of the stomach from unpleasant burns.

– It stimulates the appetite.

Other virtues of ginger

In addition to its benefits on digestion, ginger is effective on many disorders:

– It decreases the rate :

◦ of triglycerides, like cholesterol, lipidic compounds (fats) of the body, and fatty acids.

– Its anti-inflammatory properties make it an ally in the pain and symptoms of inflammatory rheumatism.

– It has antibacterial and antiviral properties.

– It is sometimes used to stop bleeding from a wound.

– It is an excellent tonic and fortifier of the body, allowing weakened people to better fight against diseases.

Good to know: research is currently underway to test the possible anti-cancer virtues of ginger, particularly for colon and ovarian cancers.

Is ginger an aphrodisiac? 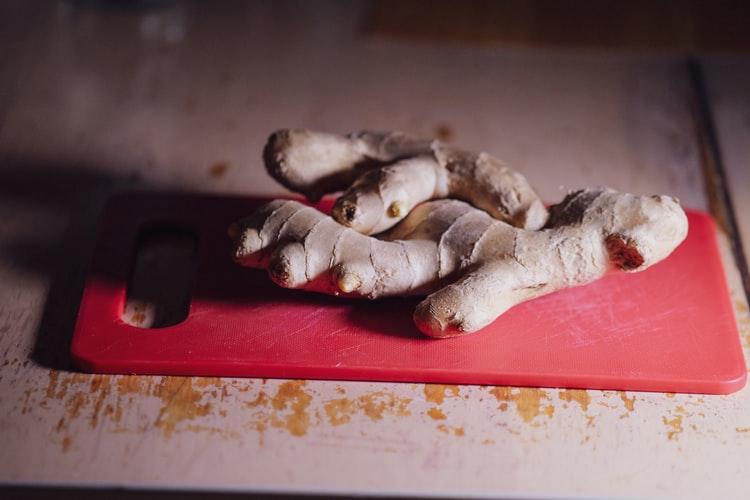 Since ancient times, writers and doctors have mentioned the aphrodisiac virtue of ginger. The Kamasutra also refers to this plant. It even seems that a famous countess, Madame du Barry, gave some to each of her lovers:

– This virtue could be related to the fact that ginger is a vasodilator because it dilates the blood vessels. Thus, the blood circulates better to stimulate sexual appetite.

– Ginger is also rich in magnesium, a mineral that helps fight against stress. It is well known that the libido is boosted when we are relaxed.

However, this property is not scientifically proven. Indeed, though some studies have supported its image as an aphrodisiac, demonstrating that it has a beneficial effect on fertility, others say the contrary.

Ginger: What are the risks?

You can consume ginger with little or no risk. However:

– In some people, mild diarrhea or heartburn may occur with excessive consumption.

People who suffer from these inconveniences during the first use can reduce the doses while their organism gets used to it.

– Be careful; ginger in high doses is not recommended for people with gallstones. It would seem that the plant promotes their formation.

– Because of ginger’s anticoagulant (blood-thinning) and hypoglycemic (blood sugar regulation) properties, it can interact with some medications if consumed in excess:

◦ For example, aspirin is also an anticoagulant. Mixing it with ginger could excessively dilute the blood and cause bleeding risks.

◦ Thus, it is not recommended to consume ginger before surgery.

I hope this blog has helped you understand the medicinal properties of ginger. Don’t forget to leave your comments in the section below.