Hearing Healthcare: What Is the Use of an Ear Bulb?

– Use of an ear bulb

Ideal to eliminate the earwax plugs, the ear bulb must, however, be used with prudence. What is an earplug like, when, and how to use it? You will get the answers in this post.

Earplug: what is its use?

To protect itself from dust particles, the ear produces earwax, a wax-like substance, greasy and yellow, which acts as a lubricant of the ear canal.

When earwax does not spontaneously flow out of the ear canal, it forms a blockage that can cause a blocked ear sensation, ringing in the ear, and decreased hearing.

It is then essential to eliminate the earwax plug, which obstructs the duct. For this, it is recommended to use an ear bulb. This ear canal enema gently softens the earwax and safely rinses out the ear canal.

Earwax in the ear canal is beneficial. Although the ear cleans itself naturally, sometimes it is necessary to intervene.

Cotton swabs are often used, but they are not ideal, and it is essential to know how to clean the ears with the proper utensils properly.

Good to know: be careful to follow the instructions for using the ear bulb to avoid any eardrum injury. It would help if you never used an ear enema on a person suffering from a perforated eardrum. In this case, you should consult a specialist doctor.

Use of an ear bulb 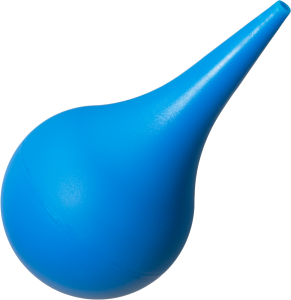 In the presence of an earwax blockage, it is advisable to use an ear wash bulb with a tapered rubber tip, which you can obtain from a pharmacy. It allows you to take an earwax enema fluid and deposit it in the external ear canal.

To safely remove an earwax blockage, the ear bulb is used as follows:

– Filling the ear bulb with an ear enema fluid: press the ear bulb’s body after dipping the bulb neck into the enema fluid and then release the pressure. Possible liquids: lukewarm water, saline solution, an ear enema liquid recommended by the doctor or pharmacist (this is an oily substance that dissolves earwax plugs).

– Warm the liquid by holding the bulb in your hands for a few minutes, limiting the cold liquid feeling when it is introduced into the ear canal.

– Insert the ear bulb’s tapered neck into the external auditory canal without pushing it in too deeply to avoid damaging the eardrum.

– Gently and gradually squeeze the ear bulb to release enema fluid. Under no circumstances should the pressure be released.

– Remove the bulb from the ear without releasing the pressure.

– Tilt the head so that excess enema fluid drains from the ear canal.

Good to know: you must repeat the operation two or three times a day until the earwax plug disappears completely. However, to remove a hard block of earwax, it is essential to consult a health care professional.

Our following publications will explain:

In the meantime, you can read our recent publications:

How did you find this post? Remember to share and especially leave your comments in the section below. Please let us know if you wish to read on a hearing healthcare topic more specific to your concerns.