Baby Acid Reflux – What About It?

You may have heard of GERD or gastroesophageal reflux disease (GERD) in adults. Have you heard of reflux in babies? Well, about half of babies under three months of age have reflux. In this article, we’ll look at why babies have acid reflux.

What is acid reflux in babies?

Baby GERD or baby acid reflux is the regurgitation episode of food (milk) swallowed in the stomach and returned to the digestive tract (esophagus). Sometimes the food goes back into the stomach or, most of the time is vomited. Babies tend to spit up after almost every feeding. This happens when milk and acid are pushed back into the esophagus or mouth.

Why do babies have acid reflux?

Acid reflux in babies occurs when their digestive system is immature. When food is swallowed, the esophagus automatically contracts and pushes food into the stomach. A valve, called the lower esophageal sphincter (LES), relaxes and allows food to pass through. The LES prevents food and acids from moving up into the esophagus. However, in GERD, the valve does not close properly or stays open. This allows stomach acids and food to return to the esophagus.

In babies, reflux occurs because the IOS valve is weak and may not close properly. Second, babies tend to lie down more often, and their esophagus is shorter than that of an adult. As a result, babies spit or burp after each feeding. This is usually not painful and is entirely normal in babies under one year of age. Sometimes the milk can mix with stomach acids and come up. This irritates the lining of the esophagus, causing pain and restlessness in the baby.

Reflux is not bad for babies because it reduces the pressure if the baby swallows more milk and helps overcome stomach discomfort.

What are the signs of acid reflux in babies?

In general, babies don’t have any symptoms of acid reflux. They tend to spill milk after a feed. However, when acid is mixed with regurgitated milk, it can cause some symptoms. When a baby who spits up after a feed can ruin his or her clothes, and even yours, but doesn’t seem to be affected, it means it’s usual regurgitation.

However, if it bothers the baby and causes pain, discomfort, and crying during or after feeds, it is usual regurgitation. Vomiting is more severe after feedings. Some babies may vomit more than they feed and tend to lose weight or cannot gain weight.

Sometimes these symptoms can go beyond acid reflux. They may have lactose intolerance, stomach infections, or gastrointestinal problems. Some babies also suffer from silent reflux that causes no visible symptoms. These babies may cry a lot and appear to have a persistent cough. However, they may seem a little relaxed when standing. 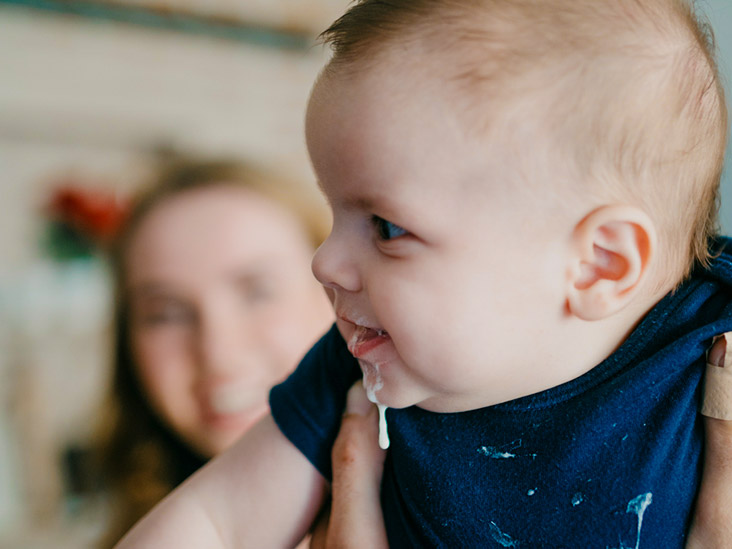 How is acid reflux treated in babies?

Acid reflux in babies is not a condition that requires regular treatment. It usually goes away on its own as the baby grows. However, if it seems uncomfortable for the baby, you can try changing the milk brand for formula-fed babies, or the mother may need to change her diet for a breastfed baby.

Give the baby small, frequent feedings so that his stomach is not too full. Hold the baby upright for at least half an hour after feeding to allow the milk to go down into the stomach. Allow a quiet period after feeds so that the milk is digested and does not cause discomfort or gas.

As far as acid reflux is concerned, all you can do is help your baby get comfortable and burp. If this seems uncomfortable and problematic, consult your baby’s pediatrician for additional advice.